Olana: A Historic Painter’s Paradise on the Hudson

Only an artist could dream up a house like Olana, the Victorian Middle Eastern-style home of Hudson River School painter Frederic Church. The artistic oasis overlooks the Hudson River and it’s easy to see what drew Frederic Church to the landscape all those years ago. Today, visitors flock to the site to marvel at both the landscape and what lies within Olana’s beautiful archways.

When the Hartford-CT born Frederic Church first settled in the Catskills with his new bride Isabel, he collaborated with Richard Morris Hunt to construct a home. But this Catskills oasis was not Olana – that dream came later. After moving here in 1861, Church soon set about improving the land according to his vision, which included planting crops, trees, and transforming a swamp into a lake. In doing so, he was creating a landscape fit for his paintbrush – for he also built a studio on the highest point of the land.

Following the tragic loss of two children to diphtheria in 1865, the Church’s spent a lot of time traveling. First, they spent six months in Jamaica, and later in 1867, they traveled throughout Europe and the Middle East, making longer stays in Rome, Beirut, and Jerusalem. Church applied these travels to his canvas, and soon enough, to his greatest masterpiece: Olana.

Prior to their European and Middle Eastern sojourn, the Church’s purchased an additional 18 acres of land with the intention of building a new home. Upon their return, they collaborated with architect and friend Calvert Vaux to construct a house that would incorporate Middle Eastern design motifs inspired by their travels. This influence manifested not only through the architecture, but with the many souvenirs filling the interior.

Fellow painter and friend Jervis McEntee recorded the following impression of Olana in his diary:

“It is certainly a beautiful house and commands one of the finest views of river & mountain in the country. Church devotes nearly his whole time to building his house, and with his peculiar talent has produced a satisfactory result. The color of the house on the outside by the judicious use of colored bricks with the stone is very harmonious and agreeable. It looks like an artist’s work.” 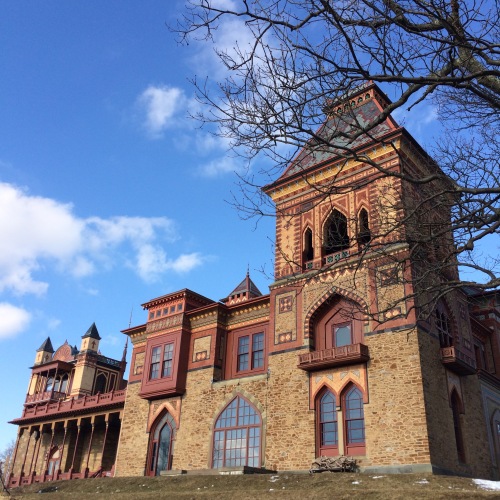 Olana truly is an artist’s work, as Church was very much involved in the design process. For example, he created decorative stencil patterns that mimicked the tile work, metalwork, and stone carving used in Islamic mosques for use in both the interior and exterior of the house. These details, coupled with the use of arched windows, a tower, and mansard roof, created an exquisite structure that beautifully blended Eastern and Western design. The Church’s moved into the second story in the fall of 1872 while work continued to be done on the first floor. The house became a lifelong project, and wasn’t considered complete until 1891.

Isabel Church died in 1899, and Frederick passed away a year later. He willed the house to his youngest son, Louis Palmer Church, who married Sarah Baker Good (otherwise known as Sally) in 1901. Louis and Sally lived together in Olana until Louis passed away  in 1943. Sally survived him by 21 years, continuing to reside at Olana until her death in 1964.

Over a century has passed since Church made his painter’s paradise a reality and thanks to the historic preservation movement, the public is able to bask in Church’s visit today. In 1964, when the art historian David Huntington learned that Olana and its contents was to be put up for auction, a preservation committee was formed. In 1965 Olana became a National Historic Landmark and officially opened to the public as a New York State Historic Site in 1967.

*All of this information was found on the Olana State Historic Site website at http://www.olana.org

One thought on “Olana: A Historic Painter’s Paradise on the Hudson”