Every October Cape May, NJ hosts “Victorian Weekend,” which promises to be a sort of portal to the past. While visitors can admire the quaint Victorian houses anytime of the year, this particular weekend has an itinerary full of murder mystery dinners, a fashion show, croquet, parlor games, and thematic walking tours.

I imagined a sort of disneyland for Victorian fans: people parading in their Victorian finest and mingling over croquet and tea against a brilliant backdrop of Queen Anne and Second Empire-style glory. The sort of thing serious historians roll their eyes at. I guess I was hoping for something between Sturbridge Village and the Newport Mansions.

My expectations and reality didn’t exactly match. Victorian Weekend had been on my radar for some time, but I didn’t have the opportunity to go until fall 2016. While Cape May is indeed full of charming Victorian houses, I have to say the organization behind the event – the Mid-Atlantic Center for the Arts & Humanities – needs to step up its game. They offer quite an itinerary, but based on the few activities I was able to partake in, some seemed lazily executed. The cool rainy and windy weather did not help – the croquet game was cancelled and, while walking tours continued, I was too preoccupied wrestling with my umbrella to enjoy them.

Anyway, Cape May is still a worthwhile trip for Victorian house lovers and I look forward to returning in nicer weather. At least on my first day the rain was mild enough that it was still pleasant to explore and take a few photos: 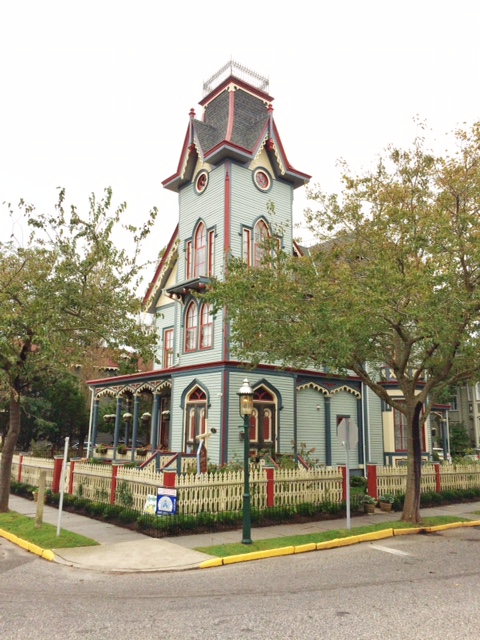 Nearly all the houses in Cape May have porches. In its heyday as a seaside resort, Victorians liked to conspicuously entertain on their front porches. The proximity to one’s neighbor and perfect alignment of these porches made for convenient snooping…

Among the many activities, I participated in a chocolate tasting tour, which, as it sounds, involved stopping at various houses and hotels to admire their architecture and sample chocolatey morsels. What could be better than chocolate and old buildings? I actually felt like a nuisance – some of the stops weren’t exactly thrilled to have visitors and I couldn’t help but wonder why these people had bothered to open their homes/businesses to the public. Also, some of the treats left much to be desired (not like this was the most important part, though some may argue otherwise).

My Victorian Weekend shenanigans also included a walking tour followed by a pretty decent brunch and the “time capsule trolley tour.” The trolley tour entailed a guide narrating Cape May’s history from a Victorian era resort town to its 1970s preservation movement and later tourism revival. Every couple of stops a “person from the past” would talk about what Cape May was like during their period of time. The tour is a nice idea, but some guides were less enthusiastically in character than others.

It’s all incredibly kitschy, but that’s part of the fun of it! I wished I could have attended the fashion show, parlor games, and murder mysteries even though they were probably painfully cheesy.

I did enjoy a lovely tea lunch at the Physick Estate’s Carriage House Cafe & Tearoom. It was delicious and a wonderful value.

I (shockingly) don’t have a Victorian costume stocked away, but I still hoped to run into a few dressed up visitors. I encountered only one and had to ask if I could take her picture, which she happily obliged: 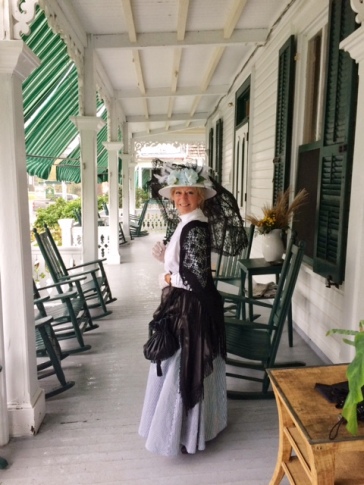 showing off her awesome poison ring

Apparently attendance, especially of the costumed variety, has dwindled over the past few years. The finely dressed lady told me that she and a group of women used to dress up together for this occasion and she was surprised to be the only one this year. Maybe one day I’ll be among them, seeing it all again through parasol-veiled eyes.

2 thoughts on “Cape May Victorian Weekend”