A Mustache State of Mind 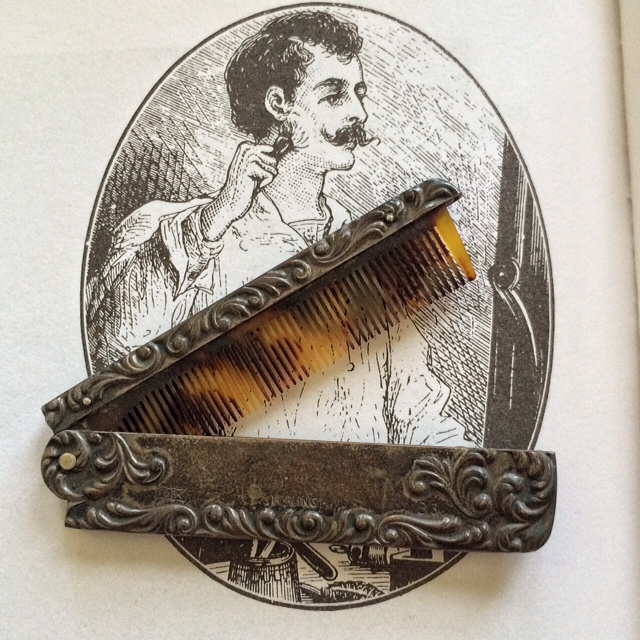 It’s Movember! Do you have mustaches on the brain? I sure do… In fact, I spend quite a lot of time thinking about them. Perhaps you’re wondering how this obsession began…

A few years ago, I was browsing the New York Historical Society’s open collections storage when my eyes singled out a tiny, seemingly insignificant object: a mustache comb.

I was a graduate student at the time and had been looking for an object for an exhibition label assignment. Upon seeing the comb I felt like I struck gold. Questions arose immediately: how common was this object? who did it belong to? what can this little thing tell me about the nineteenth century? If I were a man, perhaps I would stroke my whiskers in contemplation…

The museum’s object file gave me little to work with. The manufacturer, Foster & Bailey, and owner, Beecher Ogden, was all that was known. Beecher Ogden’s obscurity truly haunts me. I’ve managed to learn that he was an amateur photographer and donated a number of materials (and strangely, his mustache comb!) to the New York Historical Society. But if only I could track down a photo! (If a distant relative of Beecher Ogden stumbles upon this blog, please get in touch! I would love to know more about the man behind the comb and his presumably well-kept mustache).

I began my inquiry with etiquette manuals and wrote a brief exhibition label about Victorian facial hair grooming expectations. But this was not enough to quench my curiosity. I decided to pursue this subject further for my final paper, which I later expanded into my master’s qualifying paper. Down the rabbit hole I fell, combing through etiquette manuals, photographs, periodicals,  masculinity scholarship and the list goes on.

Over the course of my research I hoped to find other mustache combs and related paraphernalia, but had little luck. I’ve seen at least one mustache cup, and occasionally a shaving bowl, but a mustache comb or even a curler has yet to cross my path. This also makes Beecher Ogden’s comb in NYHS all the more perplexing. Did he absentmindedly throw the comb in with his library donations, or did he really believe it was worth preserving?

For the sake of research, I became a collector. Each related object I encounter feels fortuitous. In fact, the comb pictured, from my personal collection, is identical to the NYHS one! I now also own two mustache cups, a gillette razor, and blades.

Back in March of this year, all this work culminated in an article on Atlas Obscura, which can be read here.

My mustache studies show no signs of slowing down. I am contributing a chapter in the forthcoming anthology Framing the Face and I feel like I could never tire of researching and writing about this unusual subject. So, this month, while men grow out their facial hair in support of men’s health, I’ll be harnessing that hirsute energy to grow a chapter.