Film Review: 10 Days in a Madhouse 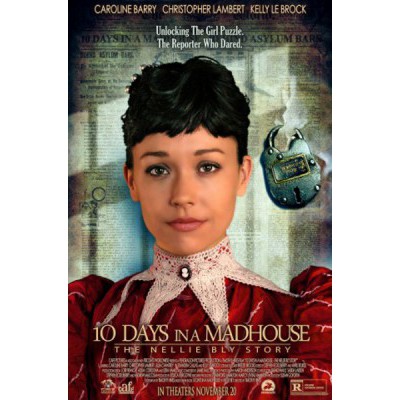 The movie Ten Days in a Madhouse  recently premiered, which is based on Victorian journalist Nellie Bly’s exposé on the Blackwell’s Island Insane Asylum in New York City. As a costumed interpreter of the famous journalist and overall Nellie Bly fan, I felt obligated to see the film. So, one morning, I, along with three senior citizens, sat for approximately two hours of disappointment.

Not that I went to the theater anticipating a cinematic masterpiece. The bad trailer ensured that I entered the theater with low expectations:

My thoughts in a nutshell:

Why I’m so disappointed:
The premise: set on succeeding in the male-dominated world of journalism, Nellie Bly agrees to go undercover as a patient at the Blackwell’s Island Insane Asylum to confirm rumors of abuse.

While the film rightfully highlighted Bly as a brave, pioneering journalist, paving the way for women to enter the newsroom, it over-dramatizes (and fabricates) some of the darkest features in her exposé.

I would warn about spoilers, but I’m fairly confident that nobody will be seeing this movie…

In the film, she is given a nightly dose of laudanum, which she promptly purges once the nurses are out of sight. It does not take long before the superintendent and the nurses notice that she is not responding to “treatment.” Tired of her persistence in advocating for the other patients and protesting the unfortunate conditions, the staff is eager to subdue her. They forcibly inject her with such a strong dose of medication that she nearly dies.

Nellie Bly did say in her exposé that patients, specifically in the violent ward, were injected with “so much morphine and chloral that the patients are made crazy,”  but she only recounts being forced to drink medicine once (and promptly vomited) because the nurses noticed she wasn’t sleeping (all the better to maintain a reporting eye). She was never forcibly injected. Also, unlike in the film, she avoided being committed to the violent wards, deciding “not to risk my health –and hair, so I did not get violent.”

Perhaps Nellie Bly would approve of this overly sensationalized version of her story, but ultimately this is a maddeningly bad effort. In addressing how much the film exaggerates the abuse, I do not meant to downplay the harsh treatment and unfortunate conditions the patients actually experienced. Indeed, patients received significant physical abuse. They were beaten, choked, drowned, and spat on. They were bathed in ice water, one after the other, without a change of water, and had to use communal towels and combs. The food was rancid and the halls were freezing, for which the patients were improperly dressed.

The film took great liberties with their interpretation of this lack of proper clothing. When Nellie Bly spoke of improper dress, surely she did not mean their only article of clothing was a sleeveless, v-necked, knee-length shift worn in the film. She meant not enough layers.

One underskirt made of coarse dark cotton goods and a cheap white calico dress with a black spot in it. I tied the strings of the skirt around me and put on the little dress. It was made, as are all those worn by the patients, into a straight tight waist sewed on to a straight skirt […] I asked that we be given additional clothing, at least as much as custom says women shall wear, but they told me to shut up; that we had as much as they intended to give us.

The film must have used the entire costuming budget on reproducing this Nellie Bly outfit: 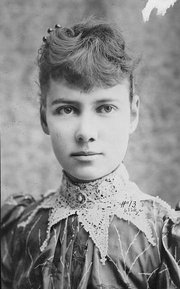 I found myself frequently distracted by so many obvious low-budget features. The brief scenes on the New York City streets and in the newspaper editor’s office have a noticeable green screen-like quality. So much so that the characters look like paper dolls pinned to cityscapes and other backdrops. I wanted to believe that perhaps this was intentionally artistic in some way.

I saw the film during its premiere week, but it opens nationwide Friday, November 20th. The only way to enjoy a movie like 10 Days in a Madhouse is if you do not care for historical integrity or quality entertainment. If these things are important to you then prepare to leave the theater with your face frozen in a grimace.